Originally published on September 25, 2018 on the Atlas Corps Blog

It was a joke I had made to my father a couple of weeks ago, which made him laugh in spite of himself: “While all my friends are getting married and having kids, I’m going to move to New York City!”

Of course, being an Asian parent, he wants the former for me, but knowing his daughter well, he knows the latter has been written on the pages of destiny.

A fellowship with Atlas Corps was what brought me here to the “City that never sleeps.” I received the news as I awoke alone one morning on the 11th floor of my apartment in Hong Kong, sometime between 5 and 6 in the morning. That meant 5 or 6 in the evening, Eastern Standard Time. (Funnily enough, while everyone had to manually change their wristwatches during orientation week, I realized I didn’t have to adjust mine as the clock hands didn’t need changing with that 12-hour time difference).

I was meant to begin the fellowship as early as March / April 2018, but I pushed it back as I was waiting to celebrate my seventh year in Hong Kong on August – marking my eligibility to apply for the HKSAR Permanent Residency. By some miracle, everything fell into place: my Hong Kong permanent residency, the September start date of the Atlas Corps fellowship, the end of my apartment lease, and the organization I’m working with now in New York City, a place that had called me by name.

Thirty years after being born in Manila, Philippines, on the Year of the Dragon in 1988, I woke up in a somewhat gritty neighborhood somewhere in Brooklyn. It was miraculously sunny that day (torrential rain the day afterwards, btw). Another stroke of luck: my host organization said I could have the Monday off without even knowing it was my birthday?!

Let’s backtrack a little: My partner, Sebastian, had flown in from Hong Kong one day before I arrived (Thursday) just so he could greet me on Friday afternoon as my bus pulled up from the 5-hour drive from DC. Friday was my first day in New York City, and of course I was listening to Jay-Z and Alicia Keys’ Empire State of Mind as we drove into the “concrete jungle where dreams are made of” – good use of my last 5% of battery life.

After dropping my luggage off at our Airbnb, we went in search of my first dinner as a New Yorker: RICE! I wanted, needed something familiar after two weeks of bagels, pizza and sandwiches in DC. We went straight for the Brooklyn Night Market, a monthly event and food fair, which ended up being a dance party with a DJ spinning hip hop, latino, and pop music. I was ecstatic. After feasting on as much rice as I could possibly stuff into my mouth from the Hawaiian-Filipino food stall (yep, très predictable), I grabbed ridiculously overpriced dessert from Two Dough Boyz*. Can you guess what I had?!

We had a late start that day, but did so with good intentions. All dressed up in activewear, we walked 1km to the famous Prospect Park and ran a pathetic 3km. (However, I did discover Nike Guided Runs that morning as well, an impressive new feature of the Nike Run Club app! The guided runs are surely put together by the best professionals in physical training, sound science, and sports psychology, if not more).

Brunch was a delicious affair at Der Pioneer in Brooklyn. (Written on the blackboard next door: “I have mixed drinks about feelings”). It was a bit of a disconcerting experience for us walking through what seemed like post-apocalyptic neighborhoods and then stepping into leafy lanes lined with historic houses at Flatbush. Where on earth was I?! 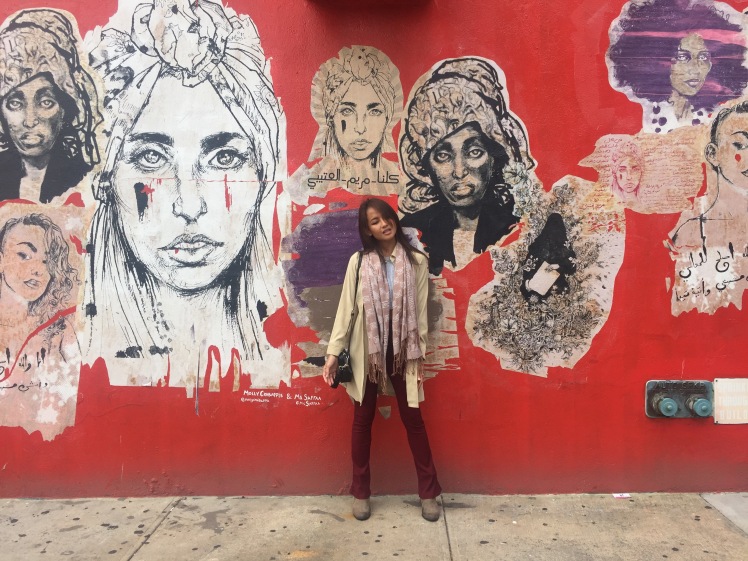 That night, we decided to celebrate my birthday weekend with a bang: at the legendary Brooklyn Mirage. We scrambled up the ramparts of the massive venue as the Paradise party went on below us. Against the background live sets of Jamie Jones and Art Department, we walked around Avant-Gardner’s castle-like battlements which had views of Manhattan from afar, across the East River. You can’t believe how unreal those moments were for me: no longer was I looking across the waters of Victoria Harbour to my favourite skyscrapers of Hong Kong Island (Bank of China and IFC). These high-rises (Freedom Tower, Rockefeller Center) were familiar only by photos I had seen, but this time my mind was going to map out Manhattan’s buildings in 3D from the memories and angles of real life.

After the 5am-er of Saturday, it was a struggle to get up for lunch with my cousins at Manhattan, but we made it and even got to play with their baby to boot. Afterwards, I tried my luck getting a library card at the majestic New York Public Library but failed with no proof of residence to date. A bit overeager to pile my plate high with reading material, maybe?

We tried to have dinner in that evening by ordering something food from GrubHub (the app). It ended up being an epic fail (apparently you have to tip drivers high to actually get your food) with me eating McDonald’s for the first time in years on the eve of my 30th birthday. WELCOME TO NEW YORK! And welcome to my thirties!! I was crying hysterically. (Hyperbole)

The big three-zero has arrived! Midnight was spent talking to my sister back in Manila, and then it was brunch at the loveliest of Brooklyn neighborhoods by the Barclays Center. Sebastian had made a reservation at Miriam, a charming Israeli watering hole whose food was just Middle Eastern perfection. I know you might not care, but as a foodie, I do: we had Mediterranean Crispy Dough (reminding me of Yemeni malawach at Tel Aviv‘s Saluf & Sons) and Burekas with eggs. My taste buds were crying tears of joy this time. 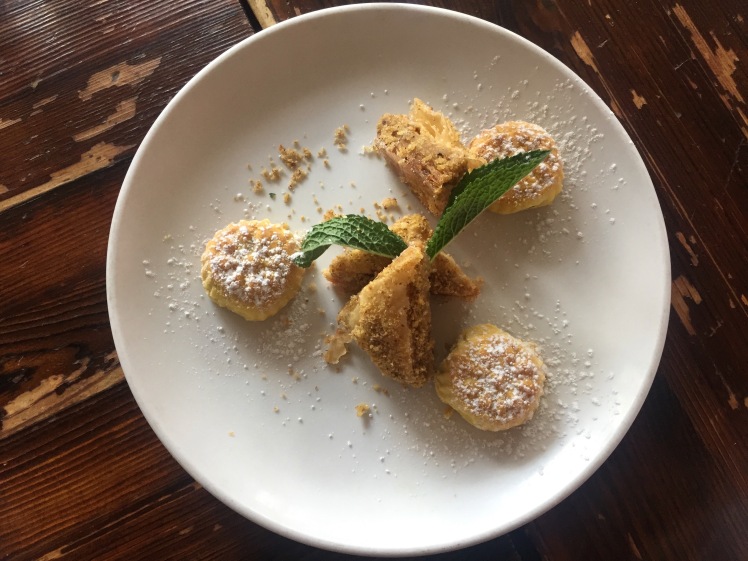 We then spent the rest of the afternoon at the Top of the Rock like the cheezy tourists we were. But hey, I needed epic dirty-thirty pictures, and what better shots than on top of New York City like a true kweeeen?!!!

We ran back to Brooklyn for dinner with the rest of my family (Dad’s side aunts and cousin) at a Filipino restaurant called FOB. Back story: The first time we took the subway in NYC with all my 40 kgs of luggage, we kept missing our train and getting on the wrong ones. I even boarded the Number 3 while Sebastian got stuck on the platform and had to find my way somehow to our end destination on line 4 despite not having any battery on my phone. Rather than get angry and frustrated, we made up a jingle called “Fresh off the boat” to make light of the situation, and would chant it to laugh at ourselves every time we made a newbie mistake – and there were a lot.

So while scrolling through the HungerPass app, and seeing a Filipino restaurant named Fresh Off the Boat, you can imagine, there were no way I wasn’t gonna eat there for my birthday.

Even if Filipinos are usually late (there is this shameful thing called “Filipino time”), apparently my US family have gotten that out of their system because they were all there at exactly 7.30pm. I was the disgraceful apparition that walked through the doors right before 8pm apologizing profusely…

Although I haven’t seen this side of the family much for most of my life, I was incredibly touched that they had gotten me a surprise cake, presents, candles, and my younger cousin even insisted on footing the bill for our whole party of five?! And we ordered no small amount of food plus a bottle of wine – so much that I even have tonnes of leftovers waiting for me at home as I type: my dinner for tonight!

Believe it or not, it’s my sister’s birthday today, so I started my day (12am) by calling her before I went to sleep. At 8am, I awoke to a violent downpour of rain, and had to run umbrella-less to the subway station with nothing but a monogram scarf to keep my makeup from smearing down my face.

As friendly as New Yorkers have been thus far (I had been warned about how rude everyone here is meant to be?!), a lady screamed “personal space” at Sebastian on the train that morning. I awoke from my 45-minute nap when that happened, as I had been dozing during the long commute.

Grand Central Station is my stop to get to work on 2nd Avenue, and there were hordes of people pushing this morning, a frenzy of human bodies trying to stay as dry as possible (impossible); plus barricades of police cars and officers patrolling the area, snipers and sharp shooters off the top of buildings just like in the movies, and pro-Trump “protesters” screaming their heads off “TRUMP MAKE AMERICA GREAT AGAIN!!!” because the President was (is) in town for the United Nations General Assembly, which happens to be right beside my new office. 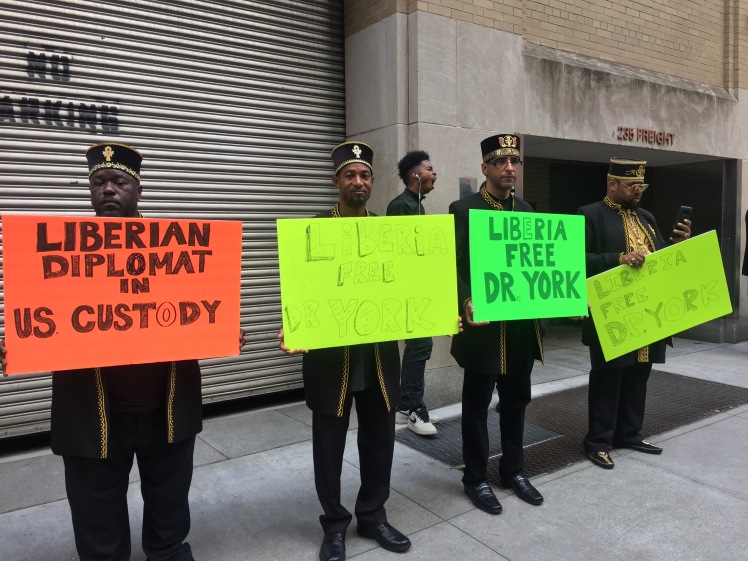 “Welcome to the city,” New York seemed to say to me again, just as my cousin had written it on my birthday card from the night before, along with a beautifully crafted stainless steel heart that I would have used to contain my memories of this place, if I could only crystallize them somehow. But then again, I have this blog to do that…