A continuation of Canggu Diaries – Yeni arrives in Bali

Writer’s Note: I had just received some very frustrating news during the writing of this post, hence the slightly angsty tone. Apologies in advance for the crankiness!

Day 2 – Kadek, the villa’s housekeeper who comes and does her duties at random times of her choosing, decided to cook banana pancakes for some of the guests at around 6pm the evening before the hike. Thankfully she did, because I had no way of feeding myself yet again, since at that point I was too scared to venture into the dark on scooter (on Day 3 I was finally forced to do it though). As well, I had yet to download the amazing Go Jek app (an app for ordering anything and everything from food to scooter rides to doctor visits to massages… the whole world should have this app localized!!! Why don’t we have this in Hong Kong / the Philippines?!)

I was ready for bed by 9.30pm since I had signed up for a sunrise hike to Mt Batur, which comes up on the top 5 things to do in Bali in any given Google search. This seems to be a recurring theme in my life recently, but there I was in bed regretting my decision to go up the mountain which meant I had to wake up in a few hours. I talk myself into doing these things all the time, and later on wish I had just given myself a break and allowed myself to sleep in. But motivational Yeni was like, ‘just think of it as your cardio of the day!’.

I checked the tour I had signed up for, and it looked like I was stuck with a Swiss or German dude named Stephan Mueller. Or, he was stuck with me. I hoped he was nice. German and Swiss people are like the gods of hiking. I hoped he wouldn’t lose patience with me because I was slow.

By 10.30pm I was still moaning and considering backing out until I gave myself a mental slap in the face because the indecision was more torturous than anything else really. I opened my door to get some fresh air and found a plastic bag hanging by the doorknob with a handful of oranges inside. Matt must have passed by to give me a little present. I checked my phone. He had messaged me asking if I’d had dinner and what I was up to.

Y: ‘Thanks for the oranges. Leaving at 1.30 but I’m not sure if you can still sign up (more of an excuse, really…)

M: Too bad… we could have just taken the scooter to Batur instead 🙂

It took us 45 minutes’ drive to Ubud and then another hour++ to the starting point of the trek. I tried to sleep in the van, which miraculously found my villa although the driver, Ketut, said he got a bit lost. Regardless, he arrived early (1.25am) and messaged me to say he was there.

‘Do I need a jacket?’ I asked. Probably not, I thought. It’s so hot here and how cold can it be in a tropical island after hiking just 1.5 hours uphill.

I should have brought a second layer because I was freezing up there, even with my inner North Face jacket (which I’ve been wearing nonstop since Israel in March, cringe). Thank God they served hot chocolate at the top and a couple of soft boiled eggs, which I held in my hands just to keep them warm. 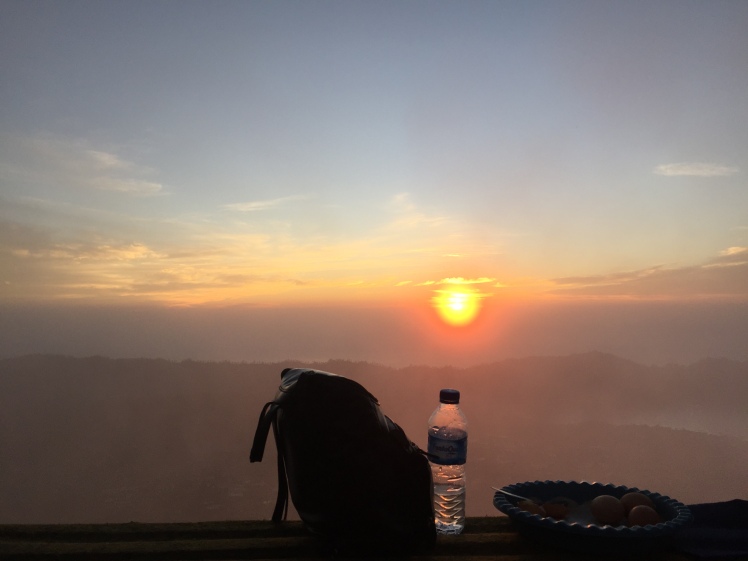 I barely got sleep in the van although I tried, and then pretended to sleep when we picked up Stephan Mueller in Ubud so I could eavesdrop on his chat with Ketut. He put forward a few polite questions and conversation starters at the beginning but eventually sank into silence for the rest of the way.

When we got to the bottom of the trail, we were introduced to our guide, a 29yo local named Nik (who already has a wife and kid btw). He gave us a torch (flashlight) each to light our way in the dark. I had read from another blogger that she was on her hands and knees on the gravel trying to get up. I scoffed at her exaggerated account of the hike. Although at the top it got quite difficult and I shamefully found myself huffing and puffing and finally asking for a teeny break at the point where it was a near-vertical ascent of 80 degrees.

At around 80% to the top there was an annoying couple who was running up the mountain. The girl, a pudgy white chick in stripes, brushed past me without so much as an ‘excuse me’. I wish I could outrun her and brush past her as rudely as she did me but truthfully I had zero energy to do so at that moment, because I was panting and sweating like the weak Asian girl that I was. No matter how much exercise I try to do, why do I feel like it doesn’t get any easier?! 😦 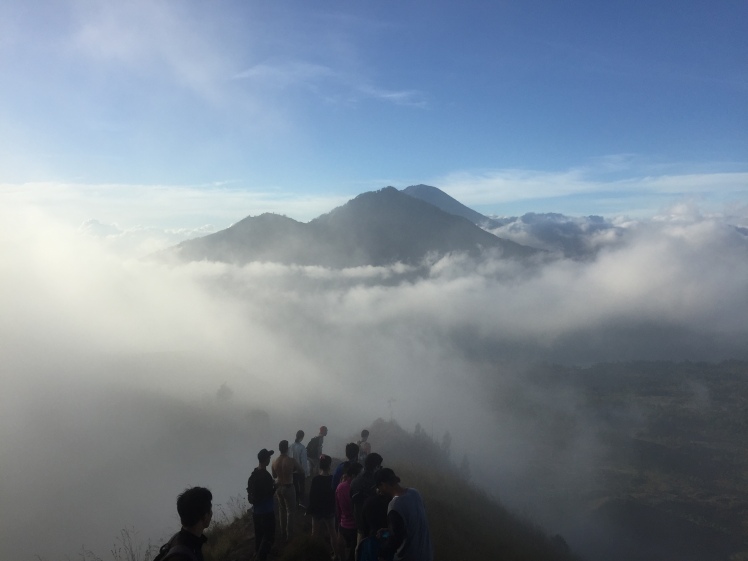 At the top everybody found their own seats to watch the sunrise. Of course there were local Indonesians who had to play music (Faded by Alan Walker) from their phones up there and then others watching the livestream of the Champions League Final (Real Madrid vs Juventus 4-1).

One of the English lads beside me made a sarcastic remark about how peaceful it was on top of the ‘sacred’ mountain watching the sunrise. Thankfully the chattering subsided and it quieted down to an acceptable level as the clouds cleared.

It was a foggier sunrise than hoped for that morning, but we were still lucky enough to catch glimpses of the spectacular view from the top. Especially that of Mt Agung, Bali’s highest point. 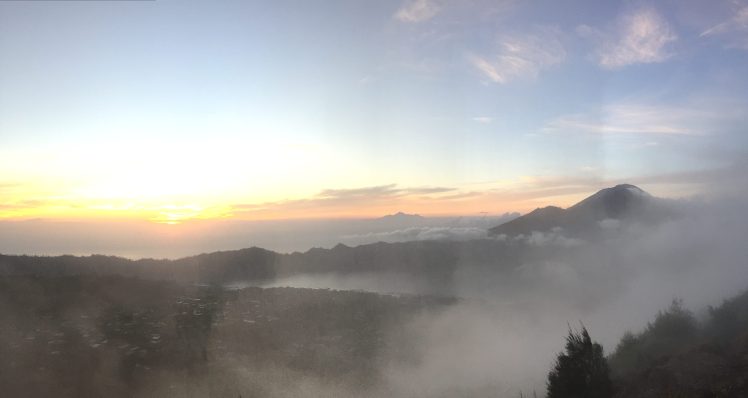 Nik served us a few sandwiches. ‘This is egg’ he pointed at the triangle, poking the sandwich as he gestured, ‘and this is banana’ poking another triangle, ‘egg’ poke…. I stared in horror as he touched half of the sandwiches in his eagerness to identify them. I thought about all the rocks he had touched, when it was that he cleaned his hands last – definitely not after he peed in the bushes earlier… But that didn’t stop us from eating the sandwiches; Stephan and I wolfed them down like hungry dogs.

After the sunrise, we walked around a natural sauna to warm our bones a little after freezing in the cold darkness. The volcanic hot spring caused shafts of hot vapor to climb the side of the mountain, and little holes in the ground were also letting off steam that were hot enough to burn your hand. Or boil an egg. Or light a cigarette, as the guides were trying to prove, but I didn’t believe that part.

Aside from the sunrise, I thought a particularly beautiful section of the hike was the grassland with purple flowers making for a magical scene. Although I’m used seeing monkeys on the Hong Kong trails, they’re always entertaining to encounter. We finished the whole thing at 8.30am, and I was back in Seminyak by 11am to meet up with my college friend, Michelle V, who had texted me the night before saying she was in Bali for a bachelorette. 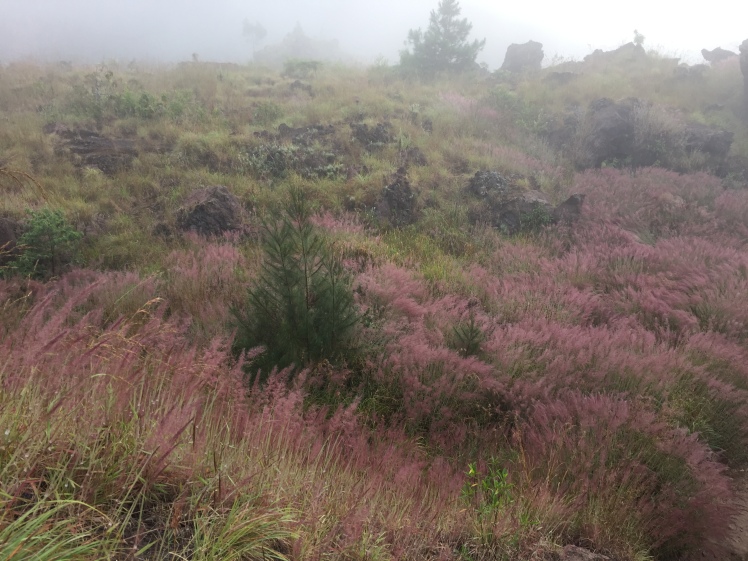 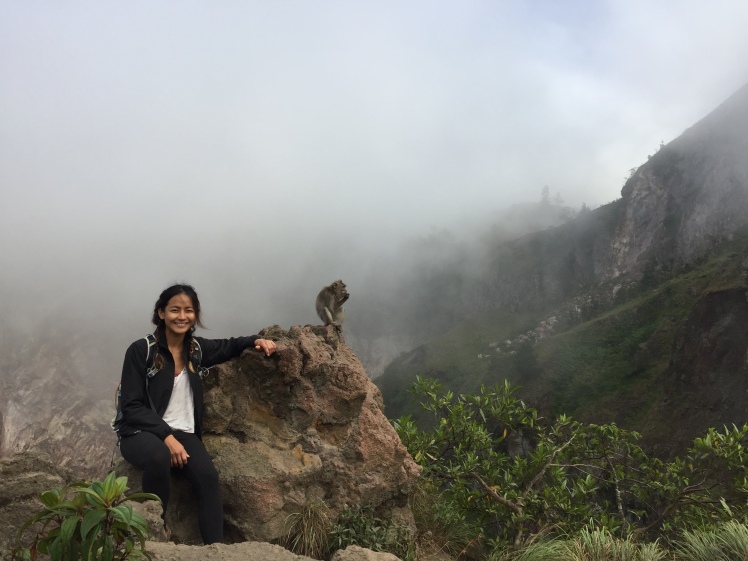 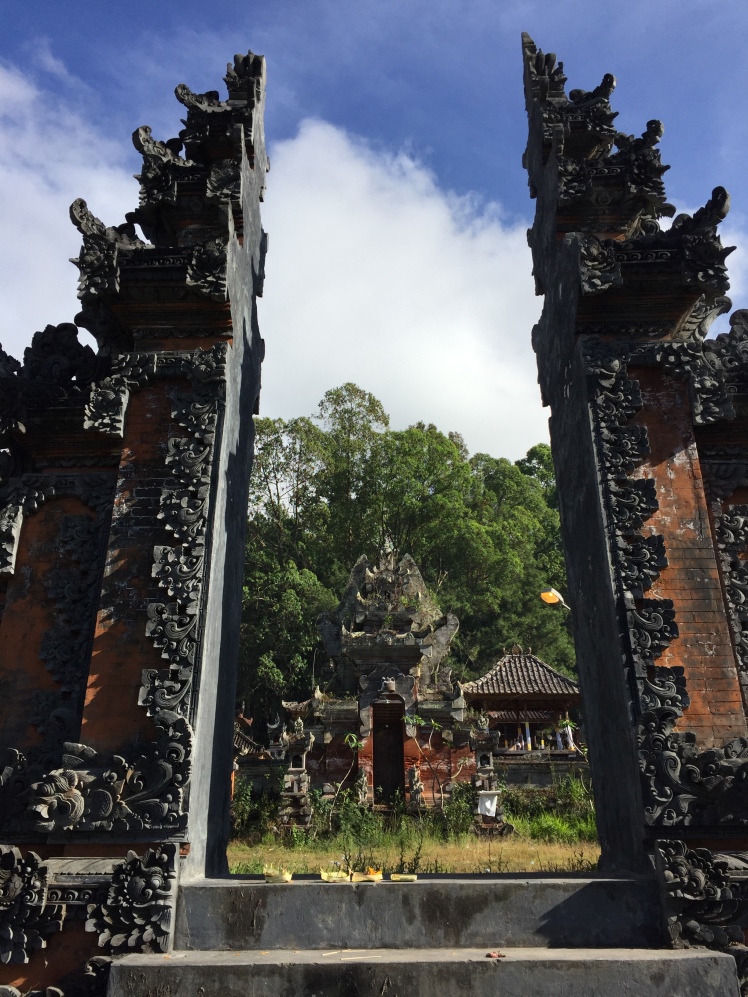 Would I recommend this hike?

Yes! Particularly the part where you’re sliding down the mountain on volcanic ash and gravel. Some people hated it and kept falling flat on their asses, but I skidded downhill ecstatically.

Hike was booked through Trip Guru, a Hong Kong based travel tech startup.

3 thoughts on “Canggu Diaries – The Day I Woke Up at 1.30am for a Sunrise Hike to Mt Batur”