Easily one of the most beautiful days of my life.

The first thought that comes to mind when someone says “Barcelona” would be the famous beachfont, La Sagrada Familia, FCB / Camp Nou, La Rambla… but hiking in the mountains? Little do people know that the mountain range 50km northwest of Catalunya’s capital is a magical world entirely in its own league. 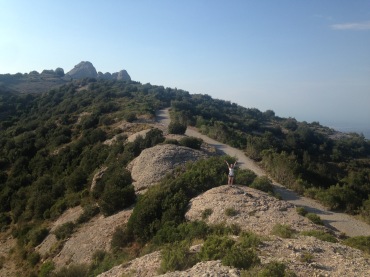 On approaching Montserrat you will see that it is thing of natural and distinctive beauty that has its own reasons for a visit completely independent of the Monastery.

I first learned of Montserrat was when my sister came back to Madrid from a trip to Barcelona to visit out aunt there. “We have to go back to hike there,” she told me. “If there’s one thing we’re going to do when we’re in Barcelona, it’s that.”

She may or may not have implied that she was going to kill me if we didn’t do it – regardless, the message was clear. She really wanted to do it.

Michiel and the view

Fast forward to June 2015, we were taking Spanish courses in Barcelona, and we were able to organise a group of friends to make the trip up the highest point of the Catalan lowlands.

Many tourists travel to Montserrat only to see the statue of the Black Madonna, patron saint of Catalunya. The Museum of Montserrat monastery is also home to artworks by Dali, El Greco and Monet… but I saw none of those. We went straight to Spain’s first National Park of limestone turrets reaching up like sandcastles to the sky.

This is apparently the most scenic way to do it. You get free funicular passes once you purchase the cable car tickets. 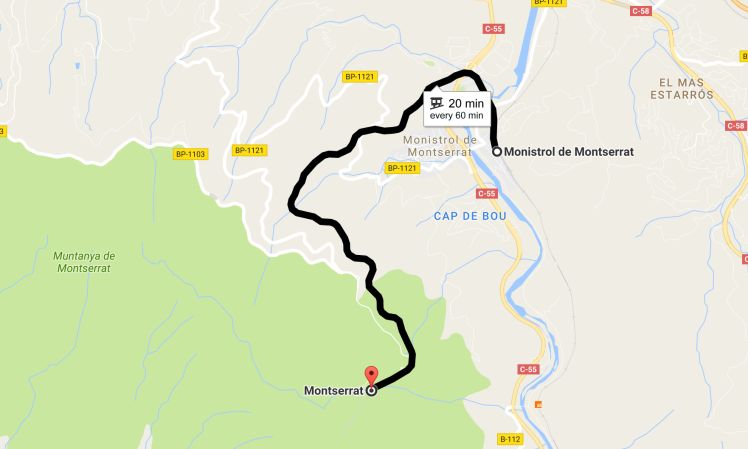 Funiculars: MM
IMPORTANT: Take note of the last funicular down, or you might get stranded on the mountain! Check out the Wikitravel page for more info.

This is what we did, because we already had a rented car which we took for other road trips (maybe I’ll blog about Tarragona next!). I haven’t tried the cable car or funicular, but maybe next time I would do those just for the experience.

We also did the hike at sunset (that summer, the sun actually set around 9 or 10pm) meaning we started just as the last cable car was leaving the abbey, where we began our ascent. Although the peak of Montserrat is 1,236 meters above the valley floor, from the monastery it’s just another 300 metres up to highest point, Sant Jeroni.

Where to start the hike

(1) Longer version: From the monastery to Sant Jeroni (2-3 hours via the cross of Sant Miquel), and back downhill through the shady valley

(2) Easier/Shorter version: From the top of the Sant Joan funicular (1-2 hrs to Sant Jeroni)

At the monastery, there are several signposts that point to where you can start your hike. They are everywhere, by the station, and even a huge map on a path behind the abbey – that’s where we found our way back.

If I were to do it again I’d start from the summit station of the funicular through to the deserted hermitages. If the tourist information centre is open, it would be even better to get directions and a map from them.

The mountain Montserrat (meaning ‘serrated’ mountain, as in sawed) has been sacred even before Christianity arrived in Spain. Prior to the adoption of Catholicism, a temple of Venus was built by the Romans on the site. Hermit monks (ermitaños) – who built various hermitages (ermitas) in the magical mountains – founded the monastery, which was expanded from the original hermitage of Santa Maria circa 1025.

In the 12th Century miracles were attributed to la Moreneta (the Virgin of Montserrat) – today pilgrims still make the journey to see her.

The legend says that in the year 880 some shepherd boys found a statue of the black madonna, the “Moreneta“, in a grotto.The Benedictine monastery was founded by Abbot Oliba in 1025, but the 16th-century building and basilica were razed to the ground by Napoleon’s troops in 1811. (Barcelona Tourisme)

During Franco’s dictatorship the monastery put up resistance. Catalan was still spoken despite the ban, and many hundreds of persecutees of the Franco regime were hiding there. More than 20 monks were executed as a result. (barcelona.de)

What can I say that will do that walk justice? We were lucky enough to have winded up on an incredibly breath-taking trail, but I suspect every single trail in Parc Natural de de la Muntanya de Montserrat is spectacularly beautiful. The course was dry, at times paved, at times gravelly, and at some points we had to climb over the rocky pillars to carry on. 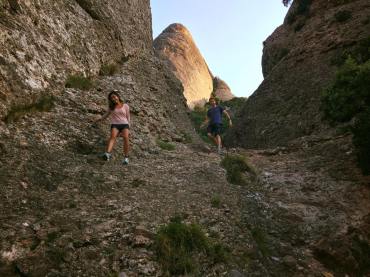 Downhill back to the monastery

There was a point where some wanted to turn back the way we came as the sun was setting, but Michiel and I were adamant on doing a loop despite not having seen a sign pointing back to the monastery in quite a while. But our stubbornness and instincts won out in the end, and we found even more spectacular sights that we wouldn’t have seen had we backtracked.

The sun was setting with the monastery not in sight

Wow. I don’t care if no one reads this, but what a beautiful memory to return to. This reminds me why I started blogging in the first place 🙂

Have you been to Barcelona/Montserrat? Did you do one of a few or all of the trails in the natural park? How did you like it? Would you have any advice to give? Or if not, would you want to do it?

I hope you find and see the beauty of this world as I did that day.