Two days ago I watched a bullfight for the first time in my life in the famous Plaza de Toros de Las Ventas in Madrid, thanks to my Tita Camille and her colleague, a die-hard bullfighting aficionado named Sylvia. When my tita (aunt) first asked me if I wanted to watch it, I hesitated because a huge part of me was loathe to watch bull after bull get slaughtered live before my eyes. But I thought this is a rare opportunity, how often does it come by? And I’m one of those people who don’t like saying no to novel cultural experiences that I would never otherwise get the chance to do. And just judge something without trying to understand what it actually is. So I said yes.

My idea of bullfighting prior to going was vague to say the least: a matador all decked out in a fancy costume waving a red flag around, and the bull charging at him. Little did I know I was in for a gruesome bloodbath…

This was how it went (according to my untrained eye): The president sitting in the box with a velvet banner presides over the bullfights as a sort of judge. There were six rounds (or six bulls) in the particular match I watched, with three mataderos (the senior toreros) doing 2 rounds each. The senior one did the 1st and 4th while the least experienced one did the 3rd and 6th rounds. But when I say “least experienced” that doesn’t mean “inexperienced” – they are the most senior of their respective teams of “toreros” or bullfighters. (Thank God I had Sylvia beside me explaining this all…)

Before each round, a guy with a board (see above) displays the weight of the bull (the heaviest one I saw was more than 600kgs!!) and other information. The toreros we had were apparently pretty bad. Typically when a matador accomplished an excellent “connection” with the bull and honoured the animal with a beautiful performance, people wave white handkerchiefs as a request to the president to wave his. And when the president expresses approval by doing this, the matador is granted the highest honour of exiting the ring through the “Puerta Grande”. 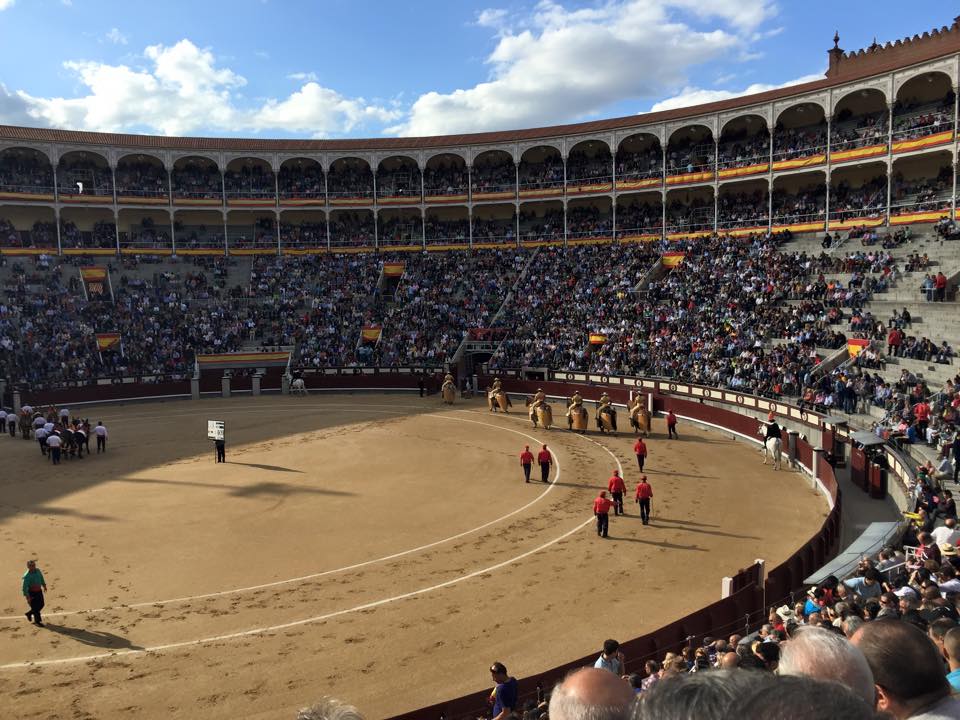 During the first match, I felt so sickened and horrified at the spectacle. I almost cried or vomited, I don’t know which urge was stronger. The animal lover in me was distraught to see what seemed like an extended butchery beginning with an energetic, raging bull being led to its death in a very calculated, clinical way. And this happens six times, each round ending with a pack of mules dragging the bloody, dead carcass out of the ring.

Up until now I don’t know how to feel about bullfighting. One part of me is upset and angered, while the other is trying to understand the art of it. I don’t want to be close minded or absolutist (that’s why I wanted to experience it for myself without dismissing it at the get go); gauging from the audience at the bullring, I don’t think the fans of this “sport” are bloodthirsty brutal maniacs. Many of them are cultured and ethical, who can explain their reasons for loving the spectacle quite rationally.

Through some mental abstraction, these bullfighting fans appreciate the “sport” or “art” as a form of respect towards the bull. One of the audience members nearby told my sister “more than any animal, this bull at least has a fighting chance.”

But not much of it, really. Because throughout the round the bull is weakened in so many different ways, by piercing it several times with a sword.

Juan Bautista born 1981 from Arles (France) – although none of them were spectacular, he was apparently the best of the lot with people standing up waving white handkerchiefs for him

Ernest Hemingway said of it in his 1932 non-fiction book Death in the Afternoon: “Bullfighting is the only art in which the artist is in danger of death and in which the degree of brilliance in the performance is left to the fighter’s honour.”

The bullfight is regarded as a demonstration of style, technique and courage by its participants and as a demonstration of cruelty and cowardice by its critics. While there is usually no doubt about the outcome, the bull is not viewed by bullfighting supporters as a sacrificial victim — it is instead seen by the audience as a worthy adversary, deserving of respect in its own right.

I’m not here to defend bullfighting nor rage against it, I’m just trying to make sense of my experience at Las Ventas. Maybe it will take more time before I make up my mind – or stay seated on the fence forever.

When I posted about my experience on Facebook, I had a lot of  violent and disappointed reactions from friends:

I doubt the bulls wanted to be put in an arena where they’re forced to die or kill. And if they die, they’re probably eaten. If the human dies, i doubt they’ll allow the bull to eat the human. It’s definitely one sided.

And from a Catalan, whose province has banned bullfighting after pressure from its residents:

Bullfighting is not art, it is just a very cruel abuse to the bulls.

How about you? What’s your stance on bullfighting? Have you seen a bullfight in your life? What do you think of it? Would you consider watching it to understand the spectacle?

If you’re not squeamish, here’s a video link to the actual fight I watched. I can hardly bear to look at it again, especially seeing the blood up close…

One response to “Madrid: Catching a Bullfight (Corrida de toros) in Las Ventas”